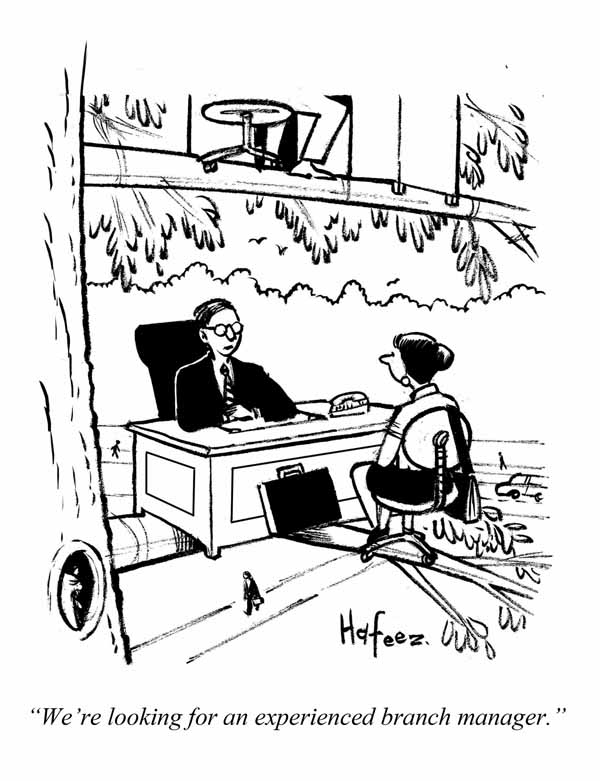 Congratulations to Joan Crocker of Gabriola Island, BC for her winning entry for Caption Contest #4.

Thou shalt include a twist, misdirection, something unexpected, a strong effective surprise, preferably toward the end of the joke.

Thou shalt make your joke concise. Thou shalt supply enough information for the audience to appreciate the humor, but not so much information that it detracts from the impact of the comedy.

And I chose to further hone the comedy line by changing ‘branch managers’ from the plural to the singular because, to my taste ,it gives the line more punch. This touches on a third commandment from Gene Perret:

Thou shalt phrase your comedy concept in a unique, clever, and entertaining way. Thou shalt word the gag in such a way as to maximize the audience response.

While a few of the other caption contest entries had promise, I chose the ‘branch manager’ idea because it pairs so well with the drawing. In the drawing we see the bottom half of a worker above, whom, based on Ms. Crocker’s line, we would assume to be a branch manager. One envisions a tree full of workers at desks on branches, branch managers all. A bit like P.D. Eastman’s Go, Dog. Go!, whereas here it would be Go, Branch manager. Go!

A final point. While this captioned drawing is quite effective as a gag cartoon, it does not quite meet the criteria for inclusion in my New Yorker batch. The reason for this is that it is, as one New Yorker cartoonist once put it, “more punny than funny”. Puns are generally frowned upon by the New Yorker humorati as being a weak form of humor. However, this gag would work perfectly well for a couple of the other markets I work with, such as Harvard Business Review or The Wall Street Journal, and perhaps even Barron’s.

In the end a successful marriage of caption and drawing. Well done Ms. Crocker!