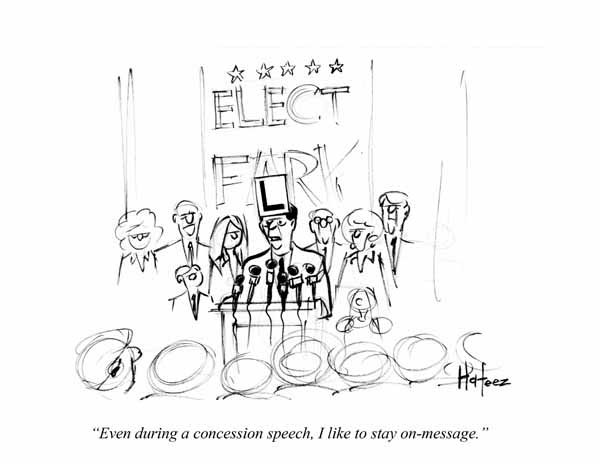 Congratulations to 3-time winner Lawrence Wood of Chicago, IL for his winning entry, by popular vote, “Even during a concession speech, I like to stay on message.”

The humor crowd sourcing experiment known as the Caption Contest continues, and has now evolved to allow the general public to vote for the best caption. Be sure to check back each weekend for your chance to vote on the captions submitted for that week.

I will be including this idea in my submissions to editors at the handful of magazine markets I work. This includes The New Yorker, Barron’s, Harvard Business Review, and The Wall Street Journal. So for those of you interested in the thrill of having an idea published in a major publication, it is possible.

The cartoon caption contest doesn’t always produce a cartoon that is worthy of an editor’s eyeballs though, and I think that’s because of the nature of the process. You’re working backward. Some cartoonists do start with a drawing then add a caption, but for me, and perhaps a majority of cartoonists, you get an idea first, then draw it. In a caption contest, there is a tendency to merely say something clever about the drawing, rather than turning the drawing into an idea that will speak to a publication’s audience. That’s not easy to do, and would be hard for me as well. But here, in Caption Contest #10, I think we may have something an editor might like.

1. Thou shalt include a twist, misdirection, something unexpected, a strong effective surprise, preferably toward the end of the joke.

2. The reader shall readily recognize and accept the truth of your comment or the truth that it is based upon.

3. Your audience shall understand the language, the references, the context, and the meaning of your jokes.

5. Thou shalt make your joke concise. Thou shalt supply enough information for the audience to appreciate the humor, but not so much information that it detracts from the impact of the comedy

6. The verbal presentation of your gag shall allow the audience to form a graphic image in their minds.

8. Thou shalt use strong, appropriate references in your joke. The references shall effectively convey your meaning to the reader.

9. Thou shalt make your comedy consistent with the audience frame of reference and point of view.

10. Thou shalt phrase your comedy concept in a unique, clever, and entertaining way. Thou shalt word the gag in such a way as to maximize the audience response. 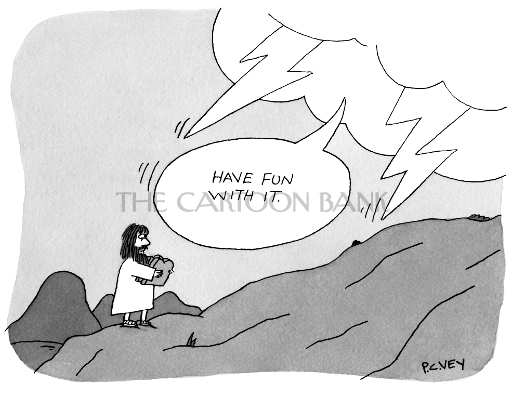